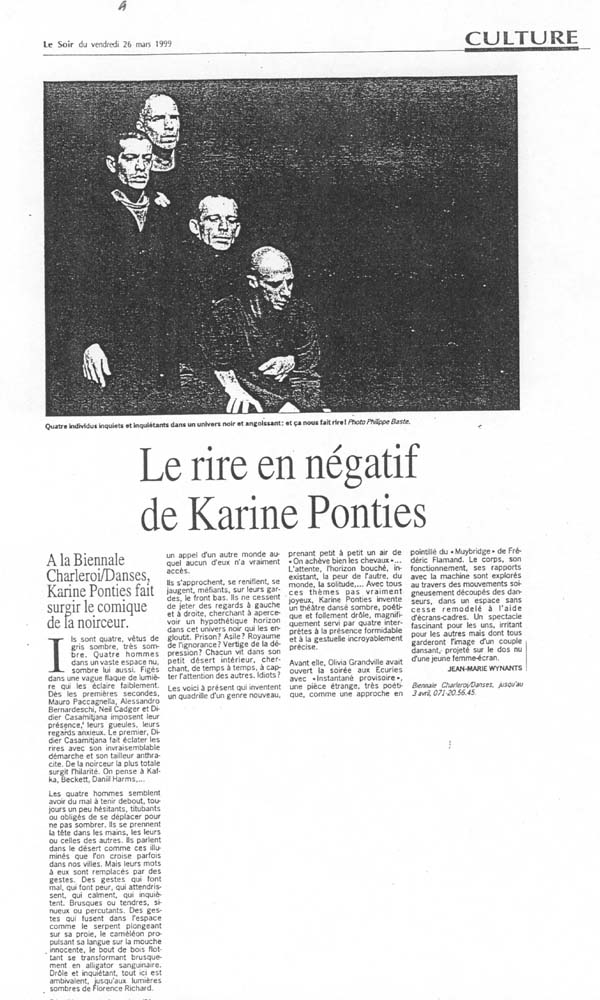 At the Biennale of Charleroi-Danses Karine Ponties gets out the comic from the darkness.

There are four, dress in dark grey, quiet dark.Four men inside a vast space, naked, also dark. Stuck in a thin wave oflight, lightly illuminated. From the first seconds Mauro Paccagnella, Alessandro Bernardeschi, Neil Cadger and Didier Casamitjana, imposing their presence, their faces, and their anxious looks. The first, Didier Casamitjana makes a general laughter with his astonishing moving pattern, and his uncommon costume. From the total obscurity out comes the hilarious totality, we think about Kafka, Beckett, Daniil Harms,…

The four men seem to have problems to stand up, always hesitating, doubting, or obliged to move so not to be shadow. They hold their head with their hands or with the others. They talk in the dessert, like those illuminated we cross from time to time in the big cities. But their words are replaced by gestures that hurt, scare, make you tender, calm or even anxious. Sudden or tender, sinuous or disturbing. Gestures that melt in the space, like when the serpent holds and eats his prey, or the chameleon sending his long tongue holding at the end the innocent fly, the piece of floating wood transformed suddenly into the bloody alligator. Funny and disturbing, everything here is ambivalent, like the lights of Florence Richard. Regularly the voice ofYma Sumac arises, unbelievable, like a call from another world to which none of the presents have access.

They get close to each other, sniffing, judging, uncomfortable, doubting, in guard, down the forehead as cheeking out. They don’t stop to look at right and left, looking for a glance of an horizon in this dark universe that is seemingly digesting them. Jail ? Home for the homeless ? Kingdom of ignorance ? Vertigo of the depression ? Each lives inside this small dessert, trying from time to time to catch the others attention. Idiots ?

And here they are again trying a different quarter of a new gender, getting little by little a kind of look that says « we are getting there, holding it by the hair… »

The waiting, the blocked horizon, inexistent, afraid of the other, of the world, of the solitude…With all those themes non of them really joyful, Karine Ponties invents a dark dance theatre, poetic and very funny, greatly served by four interpreters with a formidable presence and an incredible gesture very precise in deed.