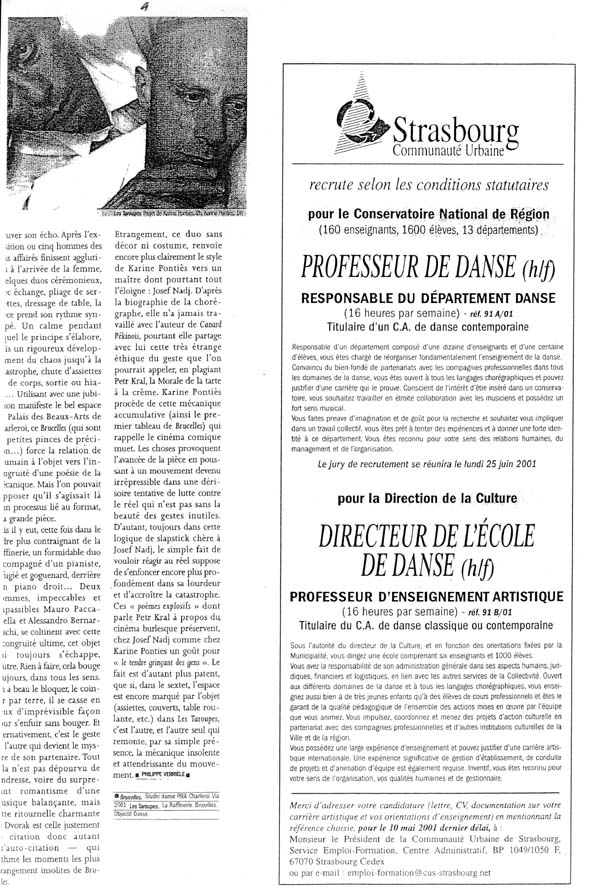 …Maybe without wanting it, the revelation of these days where the works of the different Walloons and Brussels dancers gathered in these performances, come all to one single name, Karine Ponties. Not one but two pieces, when the rest only offered one, but above all a very personal tones and a way to link dance with a strange mystery: the other.

Is the small and new that is rising, or just a mere confirmation. We don know Karine Ponties from her precedent solos full of surrounded humour like “Planta Baja” that she make us discover and where she played a disturbing character, decided and comic from her own personal and feminine approach. The interest was to discover two pieces in the line of her “Negatovas” (a masculine four) a beautiful demonstration with “Brucelles” presented at the Charleroi-Danses Festival more or less at the same time where the “Objectif Danse” hold the Via 2001 gathering and at the Raffinerie she presented an elliptic duo.

With kind of sense apart, in the décor or staging approach, a big white tissue, cutting trough the space in a triangular shape at the back of the stage, the tickling of the table service hanging from it, they are needled to it, “Brucelles” develops a strange delirium of self-submission. A team that seems more like being reassembled from a mental institution, rather than being part of the staff of a big hotel, they start setting the improbable table centred all over the place and with no periphery knot to it. The piece is not only an adaptation but a free interpretation of the strange book “L’institute Benjamenta” fro Robert Walsert. But where the author introduced the beating perversion of all commanded relation, where the sadomasochist background is at steak, here the mechanic of the rolls are crazy and the dialectic of the master and the pupil would not arise. After the extinction of the five-business man gathering at the arrival of the only woman, only very ceremonial duets are performed, exchange, folding of table napkins, there the rhythm is sinuous. A quiet moment in which the principle of the complicity is revealed, rigorous development of the chaos towards the catastrophic falling of the dishes the bodies…Using with a great sense the beautiful space of the Palais des Beaux Arts of Charleroi this “Brucelles” (small pins of precision used in the hair saloons) forces the relation from the hand to the object, inside or towards the intrigued poetic of mechanics. But we have to suppose that this was linked to the process of a big piece.

There was in a more constraints space at the Raffinerie a formidable duet together with the performance of a pianist two impeccable interpreters, Mauro Paccagnella and Alessandro Bernardeschi, where they hold themselves with this incongruent lasting attitude, where the objects is always out of reach. There’s nothing to do, it’s always moving all over the place. Despite the fact of wanting to stop it, to bloc it falls down to the ground, braking in pieces, in an incredible way, finishing by leaving without having any chance to stop it. And in alternation is the gesture of the other that becomes the mystery of the partner. Is not as there was no distressing approach of romanticism, but there is a balancing music –Dvorak- returning charmingly and is that what gives this charming and astonishing moments in “Brucelles” also. Strangely this duet without staging and costumes, send us again towards that specific style of Karine Ponties, linked somehow to a master of this way of staging performances, Josef Nadj. After Karin’s biography she has never worked with the creator of the “Canard Pekinois”, but she shares with him this strange ethics of the gesture that with could call after Petr Kral, the Morals of the crème cake… Karine Ponties proceeds with this thematic accumulation (the first picture of “Brucelles” shows so) reminding us the unspoken comic cinema movies. Things provoke the rising of the piece at a point where a movement has already become irrepressible, in a quest and fight towards the reality that is not devoiced of inutile gestures. Moreover inside this logical of the splastik, so kind of Josef Nadj’s works, the simple fact of wanting to get deeper into the real, makes us to fall deeper in the heaviness reaching there for the catastrophic. This “explosive poems” of which Petr Kral talks about, in relation of the unspoken comic cinema, they persevere as well in Josef Nadj’s as in Karin’s work. The effect is obvious more then after the sextet where the space is mark by the objects of a table in “The Taroupes” is the other, and the other only, who goes up helped only by his own presence, the insolent and tender mechanics of the movement.