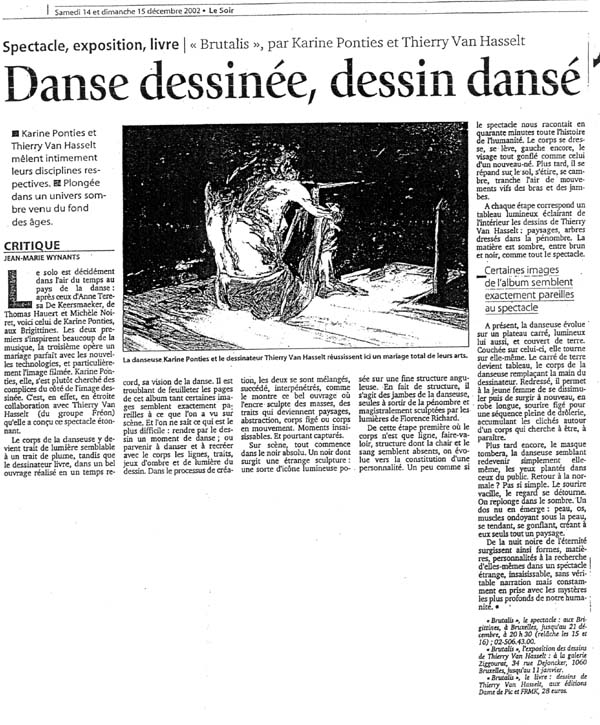 Karine Ponties and Thierry Van Hasselt combining in an intimate way their respective disciplines. A dive in the dark universe coming out the bottom of age.

The solo is defiantly in the air of time in the country of dance. After Anne Teresa de Keersmaeker, Tomas Hauert and Michele Noiret, here comes the piece of Karine Ponties at the Brigittines. The first two mentioned here inspired themselves over the music; the third operates a perfect marriage between the new technologies, particularly the filmed images. Karine from her side has chosen the complicity of a drawing designer. Is in deed the close collaboration with Thierry Van Hasselt (from the Fremok organisation) that she has conceived her piece?

The body of the dancer becomes a trace of light, like the trace of a designing feather and at the same time the designer realises his work in an incredible short time, towards his vision of dance. It is disturbing to look at the pages of this book; some of the drawings seem much alike what we have seen on stage. And we don’t know what is more difficult to accomplish if to make a dance movement after the drawing or to recreate with the body a game of lines and light effects inspired on the designs. In the creation process both approaches have been combined, succeeded, interpreted as we can see after this beautiful work where the ink sculpts masses, traces making up landscapes, abstractions, body in stillness or in action, unmatchable movements although they have been captured.

On stage all starts in pitch black from which a strange sculpture comes out, a kind of luminous icon placed over a fine thin angular structure. This are her legs, alone coming out from the dark in a wonderful lighting effect sculpturing them with a great sense of the effects made by Florence Richard.

From this first stage of the performance where the body is the structuring line, seemingly devoiced of flesh and blood, we are being taken trough the evolution and constitution of a personality. Somehow is like if we are being told in forty-five minutes a complete history of the human race. The body is dressed, gets up still bouncing a little, the face swollen like a newly born child. Later on lying on the floor stretching itself, making sharp and edge cutting movements with arms and legs. At each stage of the development a lighting effect corresponds, out of the incredible range of drawings from Thierry Van Hasselt. At the present moment the dancer’s evolution is being hold in a small square platform lighted from underneath, she turns around herself, the square becomes a frame and the dancer a drawing. She hides and appears at will, after a while disappears coming back in a black dress, interpreting a diva, funny and forced to smile though. Later the mask of this character will drop and the dancer becomes herself again. Going back to normal is not so simple, she hesitates, turning around, a naked torso facing back, the rest in black, flesh and muscles, tensing and releasing, breathing, performing the incredible landscape of the human body.

From the pitch black night of eternity, forms, shapes, materials, personalities appear inside a strange, untouchable performance, devoiced of a narrative intention, but constantly in quest of the deepest mysteries of humanity.