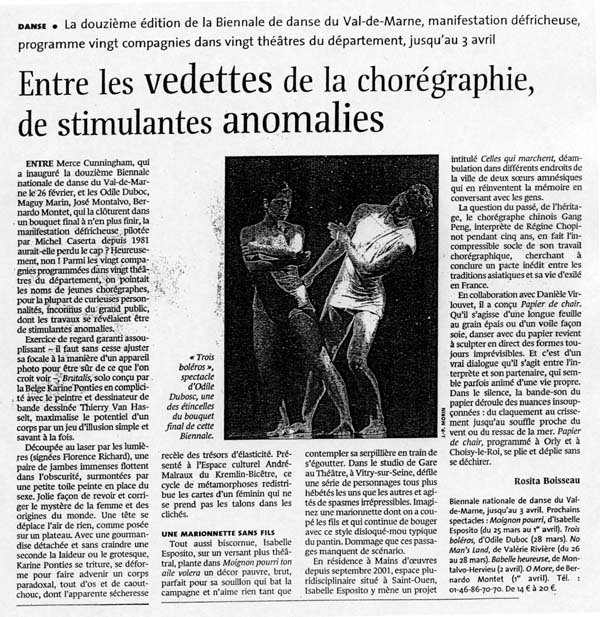 Between Merce Cunningham who opened the twelfth Biennale Nationale de la Danse du Val-de-Marne the 26th of February 2003, the Odile Duboc, Maguy Marin, Jose Montalvo, Bernard Montet, who are closing the bill as a mixed bouquet that seems never ending, is the gathering conceived in 1981 by Michel Casera loosing the aimed departing point? Fortunately not! Among the twenty companies programmed in the twenty theatres of the department, we could point out the names of the young choreographers, the most, curious personalities, unknown of the big public scenes, their works being revealed as stimulating anomalies.

An exercise of sight, of look, suppleness guaranteed – you have to focalise your sight as if you where looking trough the lenses of a photographic camera in order to believe what you are seeing is true-, “Brutalis” a solo work conceived and performed by the Belgian Karine Ponties in complicit work with plastic designer Thierry Van Hasselt, maximizing the potential of a body inside an illusive game simple and clever at the same time.

Cut off by the lighting effects of Florence Richard, a pair of huge legs floats up in an immense darkness, lighted only by a kind of small painted tissue frame at the specific place where the sex is located. A beautiful way of revising and correcting the mystery of the woman and the origins of the world. A head is moving on the space like if nothing happens, being just held by a plate, being carried by it. With a great appetite devoiced of the possibility of seeming ugly or grotesque, Karine Ponties makes herself minced out, deformed in order to build up a body made only of bones and latex, from which the dry appearance is being combined with a great elasticity. Presented at the Cultural Space, Andre Malraux du Kremlin-Bicêtre, this cycle of metamorphoses redistributes the carts of a female that is not being taken by the hills of clichés.